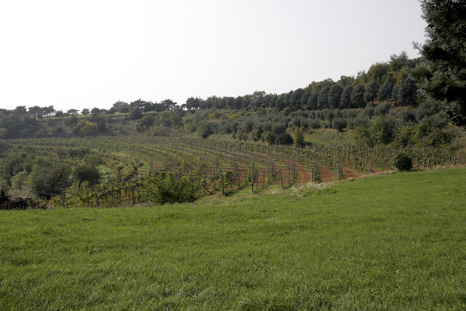 If you think Italy and more precisely to one of its most famous products such as wine, you cannot mention the Valpolicella, area important not only for the extraction of the famous red marble from Verona but especially for its wines annually brighten the tables of Verona and the rest of the world with quality products which Amarone, Ripasso and Recioto.
In this spectacular mix of beautiful landscapes and rolling hills, framed by majestic and quiet Lessinia mountains that seem to touch the sky, there is Ca’ Pigneto. Here the colors and flavors of the nature embrace the technology and the love for the culture of the grape crop and give rise to three types of wine that still stand out in the world: Amarone, Ripasso and Recioto. The production of these is made possible by the geological characteristics of the land and mild climate that is very close to the Mediterranean, as evidenced by the presence of olive groves which produce our high-quality extra-virgin olive oil, sweet and intense. The particular location in which rise the green hills of the Valpolicella, the wholesome air, fertile soil and lush, are all important elements that contribute to the cultivation of vineyards. The Valpolicella wines are known worldwide for their intense, dense and sweet to the taste that goes with recipes from around the world making your tasting experience.
The Valpolicella area was already known by primitive men as evidenced by the Cave Fumane (formerly sheltered Solinas), inhabited by Neanderthals about 70,000 years.
The first to devote himself to his passion for the nectar of God Bacco were the Arusnati, population of Etruscan origin, but only with the arrival of the Romans produced wine in Valpolicella reached a certain prestige: the Rhaetian (Recioto) was mentioned by Latin authors such as Catullo Virgilio, Svetonio, who dwelt particular attention to the overwhelming passion for wine of the Emperor Augusto, and Plinio il Vecchio in his Naturalis Historia, wrote that the rhaetian grape was beloved by the Emperor Tiberio.
The history of the region was also the scene of the scene of the Longobards, especially by the King Rotari 463d.c. who issued a decree which punished anyone who destroyed the beautiful vineyards of Valpolicella. This is without doubt a paradox because everyone knows about the violent nature of this barbaric civilization, but their devotion to the fruit of this noble land led them instead to store it and consider it a valuable asset for its natural qualities.
In the Middle Ages, the wine becomes the next important medium of exchange, especially for sealing pacts of friendship. With the advent of the Serenissima Republic of Venice, Verona intensifies in the wine trade and its export.
In ‘900 we are witnessing a revolution in methods of drying and fermentation methods. The french wine techniques are further developed and adapted to the peculiarities of the territory of Verona. We begin the processing of grapes with natural methods more sophisticated faces exaltation of perfumes and flavorings produced from grapes of Valpolicella (Corvina, Rondinella and Molinara). In this context in 1.940 is also uncorked the first bottle of Amarone, now the undisputed king of red wines from around the world.